June 06, 2017
I decided to volunteer in Roatan, Honduras with Global Healing to gain more knowledge about medicine, experience all the fun activities Roatan has to offer, practice my Spanish, and meet new people. I more than accomplished all of these goals after my month spent on the island. My time in Roatan completely exceeded all expectations (including my expectation to find great diving in Roatan which was just as good as the books said!).

The Pediatric Clinic run by Global Healing is located in the Public Hospital in Roatan’s “largest” city Coxen Hole. By “large”, I mean the city with the most local island residents. Other “large” cities include West End and West Bay, simply due to the fact they are flooded with tourists and expats. Roatan has a large economic gap between the tourists and the local Honduran people. Most people come off the cruise boats and head straight to West End and West Bay for beaches and diving. However, they miss the other, poverty stricken side of the island. Coxen Hole embodies true Roatan and the local people without tourists, cruise boats, nor fancy resorts and restaurants.

I was so fortunate to have worked with the most awesome pediatric residents from NYU, Chelsea and Mary. I am quite certain my experience would not have been nearly so great without them. They were both eager to share with me patient diagnosis and teach me about medicine. And, outside of the clinic, we never stopped exploring the island! I must say,  the three of us were perfect matches! We also worked with Dra. Cerritos. She is the local Honduran doctor running the clinic year-round meanwhile doctors from the U.S. come monthly to help her. The moms LOVED Dra. Cerritos; She really has a way with her patients and connects with the moms so well.

Every morning, we arrived to the hospital after a 30-40 minute collectivo ride from West End. Our mornings consisted of checking on the mothers with their newborns in the maternity ward, and then seeing 15 or so patients. As an intern, I greeted the kids and their moms, triaged the patients and kept records in their file.  ALL the kids were so darn cute, especially the babies! Before arriving in Roatan, I thought I would be using only Spanish to talk with the patients. However, the island has a large population of native islanders with English being their first language. Roatan used to be a British colony, so today many native people speak English. However, their English is very different, called “Island English,” and it sounds like they are speaking another language. These native island English speakers can also speak “proper English” (as they call it) and they learn Spanish in school. I found this very interesting.

Most the patients seen at the clinic came for niño sano (well-child) visits, or they had gripe (common cold). A common misunderstanding with most parents was that they thought their sick kids with gripe needed antibiotics, but as most educated people know, colds are viral infections that will cure themselves. It was not that the moms were not smart, but the local people lacked medical information and awareness. For example, one of the most seriously ill patients seen in the clinic had obvious swollen neck lymph nodes. The mom said his neck had been growing for the past month and the boy had been running a fever for some time. It was shocking to see how large they were, and to think why the mom had not brought her child in earlier. The boy was admitted to the hospital after seeing him in the clinic. He needed to be sent to either Tegucigalpa or San Pedro Sula, Honduras’ largest cities for biopsy since he most likely had lymphoma.  Because the island has limited medical care, many people are sent to the mainland for special procedures. Dr. Cerritos told us that sending patients to the mainland is complicated, especially since many of them have never even left the island. In some cases, the hospital sends a social worker to escort the patient and their family to make sure they do not get lost since it is a long haul: a 1.5 hour ferry ride to La Ceiba and then a 4-6 hour bus ride to Tegucigalpa or San Pedro Sula. Luckily the hospital has an agreement with the ferry so that patients do not have to pay. I cannot image having to travel so far for medical care, leaving behind their families on the island.

During my time, I collected data for the clinic on patient information, diagnosis, and treatment. The three top diagnoses were well child checkups, common cold, and parasitic worm infections. Parasites are very common in children in developing countries. I remember a little girl came into the clinic with terrible abdominal pain. Dra. Cerritos suspected she needed an appendectomy. The girl went into surgery, but instead of appendicitis, she had worms in her gut. I felt so bad for the poor girl. To prevent such infections, children are routinely prescribed anti-parasitic drugs beginning at one year old. The third most prescribed medication behind acetaminophen and multi-vitamins was albendazole for treatment of parasites.  We are so lucky in the United States to have clean water and safe food so that we do not have to worry about such infections.

The hospital was an interesting place. It was not modern and lacked newer technology but was sufficient to provide for the patients. Our room in the clinic had sinks, but no running water. Patient charts were all kept in manila folders. The folder room was stuffed with thousands of folders. Every day, it was not uncommon for patient folders to be empty when I reviewed the patient’s history because the folder was lost or buried somewhere in the folder room. Despite a third world feel to the hospital, patients were seen and treated by competent doctors.

The residents, Chelsea, and Mary, and I had fun working at the clinic. For me, I was able to learn and observe more than I could in the U.S. I also really enjoyed interacting with the kids and their moms. For Chelsea and Mary, they thought how lucky they were to spend a month of their residency training helping the clinic while enjoying Roatan! Hint to new interns and residents: there is the best paleta (popsicle) shop very close to the hospital! I swear we went there at least three times a week, if more!

We definitely took advantage of Roatan activities after clinic everyday.  Highlights included diving, snorkeling, beach runs, and our favorite: the Swing Boat. Someone left his sailboat floating in the middle of Half Moon Bay in West End with a rope swing for everyone to enjoy. Our apartment was 20 steps from the beach in Half Moon Bay, so I think we must have went to the Swing Boat at least a dozen times. We also tried almost every restaurant in West End, and we quickly learned how great baleadas are. Baleadas are thick freshly made tortillas filled with beans, cheese, meat or pretty much anything you want!  We decided to venture off the island too. One weekend we went river rafting in La Ceiba on the mainland of Honduras. Another weekend, we went to the small nearby island of Utila for diving and nightlife.


Thank you Global Healing and Roatan for giving me such a wonderful opportunity. I highly recommend pre-meds and other pre-health students to consider this program because I want others to have a rewarding and fun experience like I did! And lastly, hopefully one day I will return on the other side of medicine, as a medical professional! 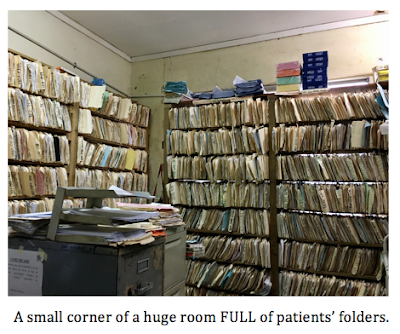 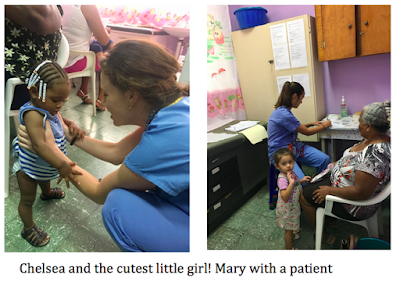 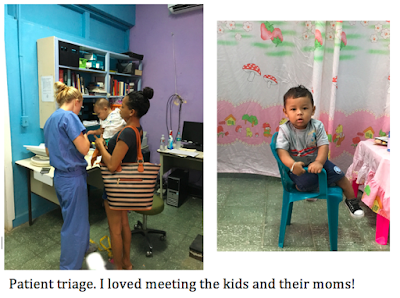 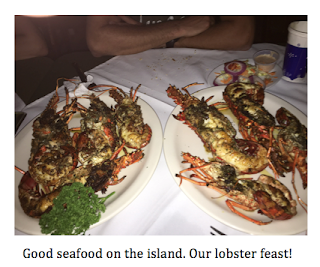 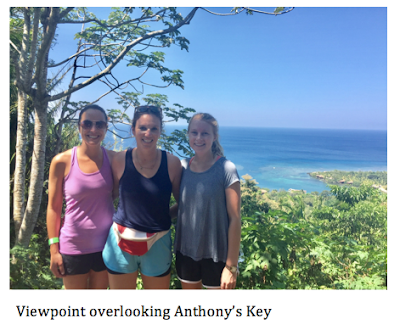 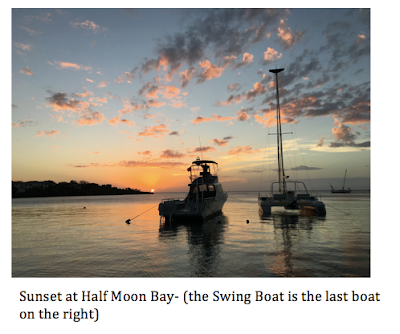 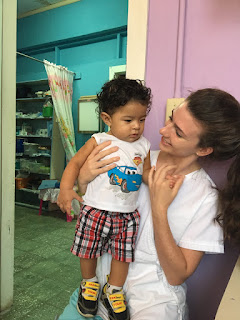 When I arrived in Roatán an employee of Clinica Esperanza picked me up from the airport . He drove a bright orange van, the back of which bounced frequently, hitting the pavement as we dodged potholes. I took in my new home for the month on the way to my apartment, as we made our way down the singular road that runs the length of the island. On Roatán the resorts neighbor the poverty. The contrast between the two was visible just in the drive from the airport, as we passed huge hotels that sat just adjacent to smaller convenience stores and houses in need of repair. This contrast was perhaps most exemplified in the pediatric inpatient room of the hospital, where necessary equipment and medications are often in short supply and mothers sit by their children’s beds in donated cruise ship chairs. The juxtaposition between vacation and the crude reality of poverty exist so close to one another on the island, yet the two rarely intersect.             My days at the hospital began with r
Read more